By Ryan Oyer. Donations go to Concerned Citizens for Justice. 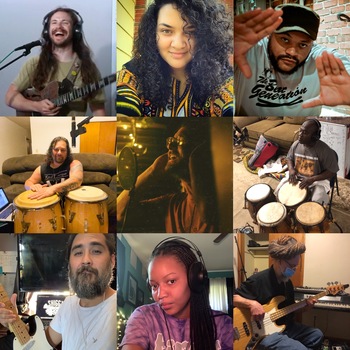 "I Can't Breathe" was written in memory of George Floyd — a 46-year-old Black man killed by police in Minnesota.
Our hope is to build a bridge of compassion, love, and peace.
Joel Forlines (guitar/sax) wrote the words "I understand that I will never understand However, I stand with you" on his facebook page and Ryan said that it needed to be in a song. Joel said to write it, and in the next 30 minutes most of the song was written. Ryan finished it the next morning at around 4am when he woke up from a dream. He messaged Christian Collier about creating a beat for the song, he also suggested having Zowie Boyd sing on it. Ryan met Bindy through Soundcorps and she sang on the song and wrote the "We are the people" lines. He also asked Raul Enrique & Kofi Mawuko to add percussion. Christian Craan plays bass and was recorded by Jake Smith in Knoxville, TN. Matt "Shiggy" Shigekawa added guitar as well.
All proceeds from the song will go to Concerned Citizens for Justice of Chattanooga, a multi-racial Black Liberation organization.
Visit them at www.concernedcitizensforjustice.org