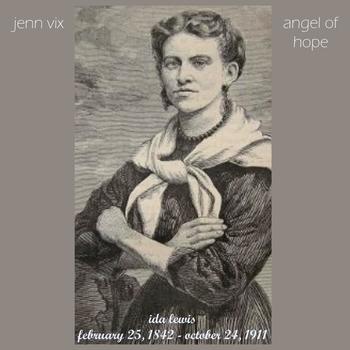 Lewis made her first rescue in 1854, coming to the assistance of four men whose boat had capsized; she was 12 years old at the time. Her most famous rescue occurred on March 29, 1869. Two soldiers, Sgt. James Adams and Pvt. John McLaughlin, were passing through Newport Harbor toward Fort Adams in a small boat, guided by a 14-year-old boy. A snowstorm was churning the harbor's waters, and the boat overturned. The two soldiers clung to it while the boy was lost, dying in the icy water. Lewis's mother saw the two in the water and called to Ida, who at the time, was suffering from a cold. Ida ran to her boat without even taking time to put on a coat or shoes. With the help of her younger brother, she was able to reach out to the two men, taking them into her boat, and bringing them to the lighthouse. One of them later gave a gold watch to Lewis. The soldiers at Fort Adams showed their appreciation by collecting $218 for her. On July 16, 1881, she was awarded the rare Gold Lifesaving Medal from the United States government. She was the first woman to receive it.

Because of her many rescues, Lewis became the best-known lighthouse keeper of her day. During her 54 years on Lime Rock, she is credited with saving 18 lives.

We all need more hope and strength, to not only help ourselves, but to help others. I wrote and recorded this track so I may help others who are in need, during this extremely difficult time. There are many people in the state of Rhode Island who depend on the Rhode Island Community Food bank, as they are food insecure, and or impoverished. Please donate to this much needed community organization. Your donation is tax deductible. Thank you.

Your perseverance and your never ending strength, inspire us all to go on