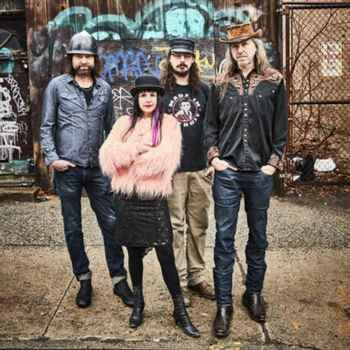 Lorraine Leckie was born on a horse in Northern Ontario surrounded by the music of Neil Young. In the seventies she converted to punk rock, married Steve Leckie of the Viletones, and started her career as a makeup artist in the fashion industry.

After a decade living in Europe, she put down roots in New York and began working with celebrity clients including Paul McCartney and Heidi Klum.

It wasn’t until the age of 37 that Leckie decided it was time for a change, got a guitar, and was soon performing all over the city at venues including Bowery Ballroom, Webster Hall and Mercury Lounge. On stage she is often joined by her band of demons: Hugh Pool on guitar, Pavel Cingl on electric violin, Keith Robinson on drums and Charles DeChants on bass.

Lorraine currently lives in Greenpoint, Broooklyn with her husband Billy Leroy and has released her new album Razor Wing Butterfly in June 2020.