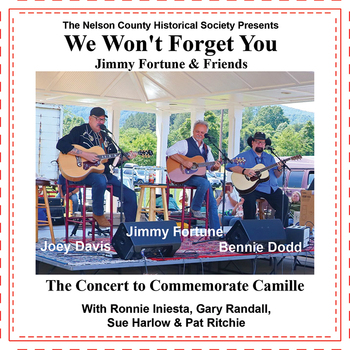 For many Nelson County, Va residents, the wrath of Hurricane Camille in August 1969 was a disaster of unmitigated horror. Over 30 inches of rain fell in 7 hours, leaving devastation in its wake with mud, boulders and trees descending into the gaps and hollows of the Blue Ridge Mountains. More than 120 people, many young children, perished that night; many of the victims were from the same families.

The title track, “We Won’t Forget You,” was written by Country & Gospel Hall of Famer Jimmy Fortune in memory of those lost that night. The song appears twice; as recorded by Fortune and a live track with Fortune, Joey Davis and Bennie Dodd, all Nelson natives and Camille survivors. “The Bypass,” written and recorded by Davis as a teenager in 1969 selling over 300,000 copies is also included along with Camille-inspired songs by others. “Virginia Dreams” by Fortune is included as a bonus track.

Proceeds applied to enhance the Camille exhibit at the Oakland Museum in Nelson County.